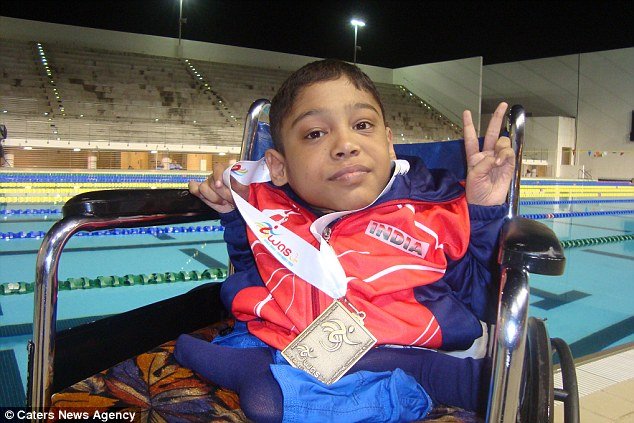 Bone fracture is one of the most painful things to occur to anyone. Every time a fracture occurs it takes at least few months to recover. It affects the normal life. What if that fracture follows you for lifetime. Master Moin M. Junnedi is living similar life. He is suffering from Osteogenesis Imperfecta (OI). It is commonly known as Brittle Bone disease. But he is also the youngest physically challenged swimming champion in India. Ironic! His story is an eye-opener for you.

Moin M. Junnedi was born in 1998 to a normal family. When he was 9 months old, his mother Kauser Banu heard a strange sound. He was just playing. But he didn’t stop crying for hours and they had to visit hospital. They came to know about his Brittle bone disease which is very rare. Continuous medication and supervision is necessary to avoid any further fractures. Well, the disease leave little to no room for bone strength. He had to be handled with care. Even hugging or any sudden movement can cause him serious trouble. He has as many as 50 bone fractures at 2. Fracture means broken bones but also unimaginable pain. Moin grown up knowing his problems and pain.

A miracle happened when his parents met the Coach Umesh Kalghatgi. He noticed the young boy’s brave soul and trained him. While Moin is confined to his wheel chair on land, he ruled the water with the help of coach. He was born to rule the water. He competed in 10th Paralympic Swimming championship and grabbed the first medal in 2009. Not just one, but two gold medals. He again participated in Bellary National Meet and clinched gold in 2010. He was just getting started. In recent times, he won 1 Silver medal and 4 Gold medals at various National level completions.

At the beginning, many coaching clubs refused to admit him due to fragile health condition. After a lot of search, finally one coaching club accepted him. Now his parents are proud to have him. Well, they always be proud of him. He has siblings who will take care of this health condition. Few prominent coaches like Anand Patil, Kallappa Patil, Prasad Tendolkar, Umeash Kalghati and Sudhir Kusane. His greatest achievements were floating on water for more than one hour and swimming continuously 200 metres. It is an extraordinary thing to do for someone who can fracture his bones with small movements.

Till now, he has more than 200 fractures. But nothing is capable of holding him back from swimming again. He couldn’t have formal education like others. So his mother, a homemaker fulfills it by teaching in home. His father Mushtak is a farmer. They couldn’t afford for his treatments. But there is still good hearts in our society who provides financial support to the family.

Master Moin M. Junnedi with his fused limbs aiming high and aspires to become world’s greatest Paralympic Swimming champion. He is not saying anything to motivate you. But his actions, dreams, will power speaks more than a thousand motivational speakers. Never give up!