Surgery is one of the advanced stage of treating patients. It demands experience. Experience comes with age. But you are going to meet the youngest surgeon in the world. Akrit Jaswai, at 7 successfully conducted a surgery. He is well known genius in the medical industry. His surgery video went viral on internet and so as our attention.

Akrit Jaswai, one of the wonder kids in India. He walked and talked as little as a 10 month baby. If that didn’t surprise you, he started writing and reading at 2. Well, he was just getting started. At 5, he was reading Shakespeare writings. He was always a curious kid to learn something. He was visiting hospitals since 6 year old. He had experience in handling the patient firsthand. So he was well known among his local place.

Once, an 8 year old girl suffered from fire injury as a baby. Her parents couldn’t afford for surgery and as time passed, her fingers were fused together. Since it affects her daily life, her parents requested Akrit to help them with her fingers. After signing a waiver bill, he agreed to conduct the surgery for free. The little girl’s parents felt grateful and prepared for the surgery. All necessary equipment were bought. On November 19, 2000, Akrit Jaswai conducted this operation and released her fused fingers. Akrit’ s parents recorded the whole incident and uploaded online. That went viral all over the world. Thus brought the name youngest surgeon in the world.

Since the video made Akrit an internet sensation, Opera Winfrey interviewed him in their show. He expressed his interest to find a cure for cancer. After that interview, his name reached all corners of the world. Following that, Imperial College of London, called him to discuss about various topics including his medical theories. They were interesting. Oral Gene Therapy is one of them. He believe it could be a breakthrough. So Professor Mustafa Djamgoz and consulting urological surgeon Anup Patel, two prominent scientists of that college invited him for a discussion. They believed in his potential but his theories need lot of work to be done. But definitely possible, it just needs time and accuracy. Any research on DNA level demands it.

Another invitation from leading researchers of London came his way. They wanted to assess his intelligence level. According to the ‘Team Focus’ who analyzed him, the IQ is 145. A massive score for anyone at his age. Akrit did very well in verbal and numerical section, but there is a room for improvement in pattern matching skills. The organization expressed their wishes to the kid in future endeavors.

Akrit showed interest in science and anatomy as a child. Since he visited hospitals on a daily basis, he know the pain of patients. He wants to find a cure for cancer and working towards it. The Chairman of Secondary Education in Dharmasala, mentored and sponsored him. He joined Chandigarh College University of Punjab at 12, to pursue his degree. He is the youngest student accepted by Indian university. At 17, he did his Masters degree in Chemistry. Now, he is studying Bio Engineering at IIT Kanpur. He is focused, confident and his research to find cure for cancer continues. We wish him a great success in his life. 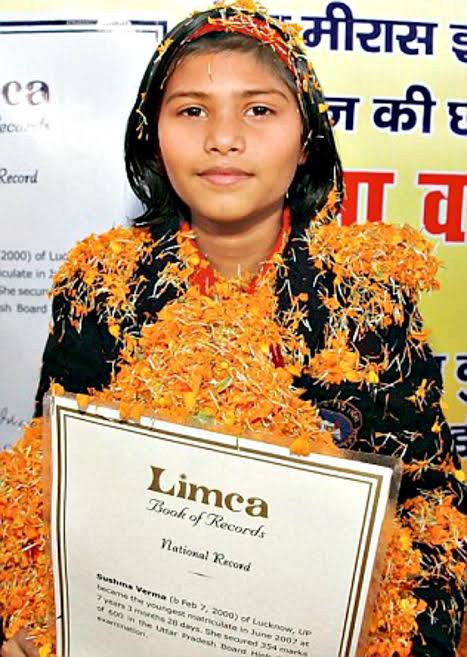 ‘Knowledge is Power’. The power to make an impact on the world. Education is at the core. Proper education is crucial to acquire great knowledge. But there are some kids born with the knowledge. Perhaps the ability to grasp things faster than normal kids. The only thing stops this girl from appearing for medical entrance exam is the age restriction. Sushma Verma wants to be a doctor and waiting until she turns 17. She made a record by completing X class at 7. She got a place in Limca book of records.

Sushma Verma is from outskirts of Lucknow. Her father was a Sanitation worker and mother is a homemaker. A family who cannot afford anything other than a normal education. But Sushma is not an ordinary student. Her talent came to light when she recites Ramayanam as a 2 year old child. She was a bright student in school. After looking at her talent, she was allowed to enroll in Class X at 7. She passed it with outstanding performance. Her parents supported in all possible ways. After all their kids has the most precious wealth in the world, education.

Financial problem became a hurdle as she climbed up in life. She remembered those tough times. But nothing was able to stop her. People from many places helped her in all possible ways. At 13, she completed her undergraduate degree. She enrolled in MSc Microbiology at Lucknow University. In spite of her problems, she got her Master’s degree at 15. In addition to that, she also scored a CGPA of 8.

Sushma always wanted to be a doctor. But our education system restricts people from applying for entrance exams until 17. So she had to wait for another two years. She was really upset with such rules. People should be evaluated based on talents not by age. But she is a bright kid: she had backup plans. Instead of waiting and wasting the two years, she joined for PhD program at Babasaheb Bhimrao Ambedkar University. Agricultural Microbiology is her field of interest. There is a strong reason to choose specific course.

Sushma used to visit fields and observed the land conditions. The soil in and around Lucknow is becoming arid every day. She wanted to explore the reasons and possible solutions to make it a fertile land again. Because greenery can be built only on fertile soil.

If there is anything sushma’s parents could be proud, is her academic achievements. She has a younger brother who is also set to make some records. Despite the troublesome situation for Sushma and her family, once in a while there is something to celebrate and be proud about.

Sushma is one of a kind who focused on her dreams even though there were lot of problems. Financial problems are not easy to solve. Most of the middle class family can understand her struggle. We wish her great success in all endeavors.